The U11s took part in the Regional IAPS Championships which was held at Uppingham School.

Having only come up against one familiar school in their pool, Wisbech, the team were up against some unknown competition. The girls put out some fantastic results in their pool, in particular an impressive 15-0 win against Stephen Perse. Finishing in a strong first position in the group stages, the team was able to progress through to the quarter finals to secure another win to advance onto the semi-finals. 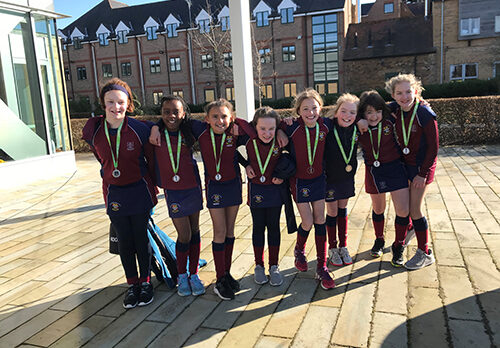 In a heart-racing semi-final, the team stuck to task and did not let their concentration deter from the high stakes of the 1st and 2nd place final with a clinical second half of the match. After a fantastic and highly contested final, the girls came 2nd overall out of 18 Schools and are through to National Finals, which will be held on the 20th March.

It was fantastic to see all the players putting in such a great team effort and to continually try their hardest for one another. We can definitely say that the future is bright for Wellingborough School Netball.

Sports in the Prep School

Back to all news

Thank goodness for some indoor sport at the moment. Well done, ladies! https://t.co/aSukfZttYl

Thank you to @Pitsford_School for hosting me today - lovely to walk round, meet some children and staff, and also to discuss some topical issues with Dr Walker.