After two failed attempts to organise the London Dinner due to COVID, we finally made it to this most prestigious event on Friday, 18th March.  The Cholmondeley Room looked glorious and it was just lovely to admire the view of the Thames at Night from the Terrace Bar. Current Club President Professor Peter Crisp and Past President Julian Amey enjoyed a fantastic evening welcoming over 100 OWs and guests.  The House of Lords Team did the Club proud and the food and speeches did not disappoint. 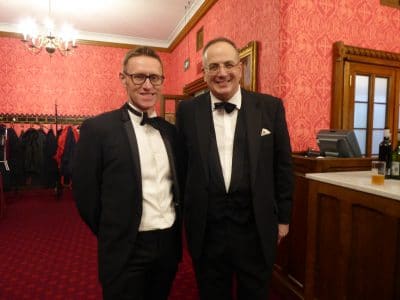 Guest Speaker, Michael Ellis MP spoke fondly of his old school and was clearly delighted to be back in the company of his contemporaries.  There was a great mix of young OWs and not so young OWs with the Headmaster Andrew Holman referring to the unbroken line of Wellingburians from Major General Richard Peck who started at the School in 1947, to the current Heads of School, who are soon to become OWs in July 2022.

It was a special night – thanks to all those who came along and supported the Club.  Roll on next year…..

The OW Golf Society continues to be well supported by both new and old leavers, with a variety of events throughout the year to cater  for every type of golfer.  If you are interested in receiving more information throughout the year and attending one of the events, please contact Tim Poole at poolet@utileengineering.com

To view the Calendar of Events for 2022, please click on the link below. 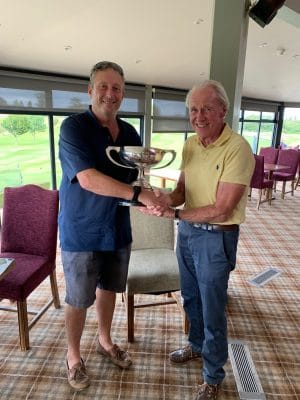 This year’s Spring Meeting was held at Wellingborough Golf Club on Friday 14th May with a much improved turnout of 18. We hope that by keeping this and other fixtures local to the school, we will help to attract more budding OW golfers of varying standards in the future. The cost was kept down to £30 for the day which is exceptional value for Wellingborough. We welcomed Richard Browning, Angus Bennie and Toby Hemsley to the fold for the first time, saw the return of the brightly coloured Sam Pepper as well as several other young and enthusiastic golfers. The day was played for the Gillet Vase and awarded to Chris Billson achieving an outstanding 39 points with second place going to Sam Pepper with 36 points on countback from Toby Hemsley.

This fixture was held at Overstone Golf Club on Friday 17th September. The day was fair and the course played well. The 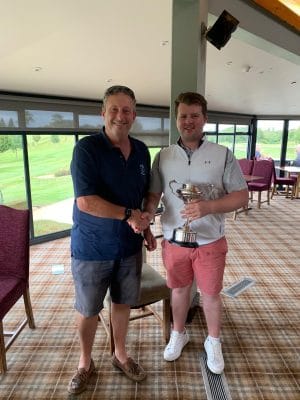 OW Cup was lifted by Sam McGuire with an outstanding performance on the day. We welcomed Annie Panter as a new recruit who played alongside myself and her Father, John Panter our current OW Golf President. Chris Billson put in another high class performance which was enough for him to secure (once more!!) the Wright Cup, for the best combined scores from the Spring and Autumn meeting. 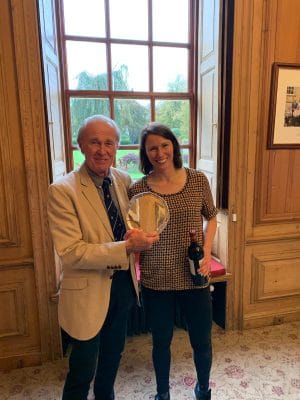 Our traditional end of year finale, always held at Wellingborough Golf Club with the AGM to follow a sit down meal, is always a fun event and definitely worth attending, whatever your level of golf. This year was no exception, 22 Old Wellingburians attended with new recruits Jonty Hallett, Greg Evans, Dave Morgan, Marcus Carter and Joe Zielinski all enjoying a great day. Third prize was taken by Marcus Carter with second awarded to Jordan McGuire with an excellent 37 points. Our winner by a country mile was Annie Panter who achieved an enormous 47 points. Playing with Jordan and Sam McGuire, Annie has only recently taken up golf on a more consistent basis and is clearly showing her true sporting potential. Well done Annie, see you next year to defend the Hugh Denton Salver! 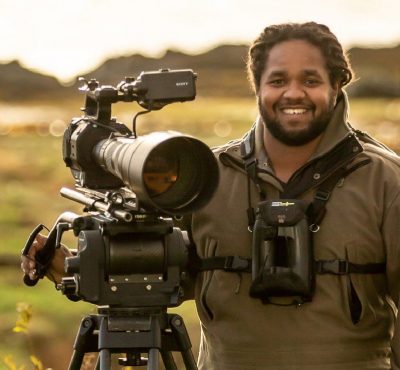 A “staycation” to the Scottish west coast      back in September enabled former Garne’s housemaster, Mike Askham, to touch base with the rising star of wildlife photography and tv presenting, “ranger” Hamza Yassin.

After a false start pursuing a medical degree, a zoology course was much more to Hamza’s liking. What then to do was answered by a Master’s degree in Biological Photography and Imaging.

Unpaid labour humping the equipment of an established wildlife cameraman; living in his car for six months, then a caravan; working as a ghillie and taking whatever photographing assignments that could be found – usually weddings – and, eventually, a reputation was established as an expert in filming birds around the coast from his idyllic home on the westernmost point of the Scottish mainland. 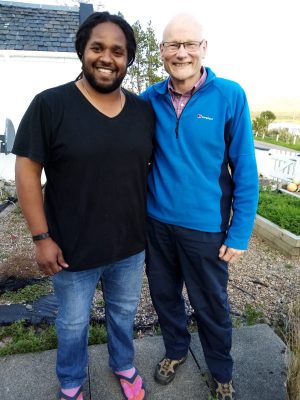 Recognition followed after exposure on BBC’s, ‘The One Show’, as one of Britain’s up and coming wildlife photographers, along with appearances on other programmes such as ‘Countryfile’ and ‘Springwatch’. A further development in his career was being invited to front his own children’s show on the CBeebies channel in which Ranger Hamza takes children on rambles through local parks and the countryside.

As if that wasn’t enough, in December 2019 the BBC sent him down to Antarctica to film for a new season of Sir David Attenborough’s, ‘The Frozen Planet’ and this summer Channel 4 filmed an hour long documentary on his life entitled, ‘Scotland: My Life in the Wild’ which was aired on Saturday 12th December.

Wellingborough School held a very much restricted Remembrance Service on Sunday, 8th November to honour those who bravely fought in all wars and lost their lives. There was no Chapel Service, but Steve Hill, Chaplain gave his address outside, along with Headmaster, Andrew 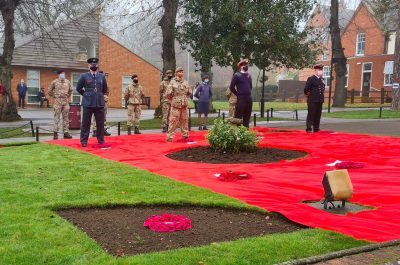 Special thanks to George, the Year 10 pupil who performed the Last Post admirably.

“I became part of a group making scrubs for the NHS which is only just winding down now – thanks to a fellow parent, who was a west-end costume designer, we have made and delivered about 2800 scrubs into Kings, St. George’s, The Maudsley, Bethlem Psychiatric clinic, Lewisham Covid ward, paramedics, GPs and prison nurses.”

Sarah has found the experience both tough and rewarding “it was all-consuming but also showed us how amazing people are at coming together and helping each other when hard times come along”.

Here’s a YouTube clip of Sarah, along with other members of the group, explaining how it all came about.

I joined the NHS in December 2005 as an Information Analyst following 10 years in the IT industry where I had spent the second half of that time being impacted by some of the negative effects of the Dot.Com bubble. What started out as something I thought would be a stop-gap has turned into a 15-year career! 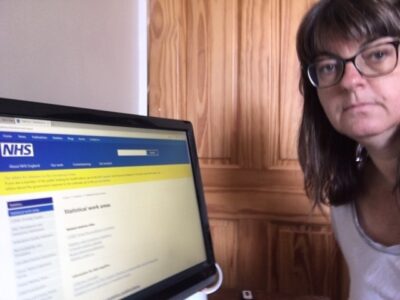 My first role in the NHS was on a treatment support programme for cancer patients where I was responsible for putting together the list of those we would invite to participate and collect and analyse the data to evaluate the programme.  Following this, I moved to the Dept of Health working on a national public health improvement programme and then to a large acute hospital, which was my first experience of the NHS frontline. Three years there flew by without a dull moment! I have now been with NHS England for the last 5 years.  We analyse many aspects of healthcare provision across the South East of England to identify where we can make improvements to patient care. It’s always amusing to listen to the political debate with the benefit of inside knowledge.

I am currently involved in ensuring that the normal services the NHS provides, which have had to be reduced or interrupted to make way for COVID-19, can be reinstated as quickly – and safely – as possible.

Loving working from home again permanently and hoping never to have to get on a packed train again! 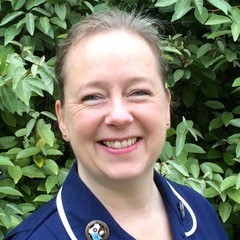 I remember telling my Granddad at the age of 4 yrs old, I wanted to grow up and be a nurse to look after people like him. He was terminally ill and at that tender age I helped in his personal care. The desire never left me. On a summer camp at 15yrs old with school CCF, there was an horrific accident that killed a couple of cadets. I got involved helping with basic care to look after the other 24 involved whilst we were waiting for ambulances to arrive. I applied to do my nurse training there and then and started a pre-nursing course at college rather than complete 6th form.

I have had a fantastically varied nursing career – worked in Northampton, Birmingham, the British Army. I met my husband, a Doctor in the Army and followed him for 20 years.  Initially my speciality was Trauma and Orthopaedics then once I had children I retrained as a Health Visitor. I now work as a School Nurse / Practice Nurse with a GP surgery in Buckinghamshire. I have been nursing for 35 years this year. The desire to help people has never gone away. As well as nursing, I have been involved with the Military Wives Choirs (a Co-founder of the Foundation) and most recently helping my own village by setting up a support network of volunteers and co-ordinating the help for all those isolated by ensuring they have food, prescriptions and errands run during this current pandemic. I have also been sewing for colleagues – laundry bags/scrubs/hats/masks.

I was nominated by a villager as an NHS hero and won a fantastic WELOVESHOES prize! Nurses will always help where they can, they cannot help themselves! I love my job. It is a true vocation. 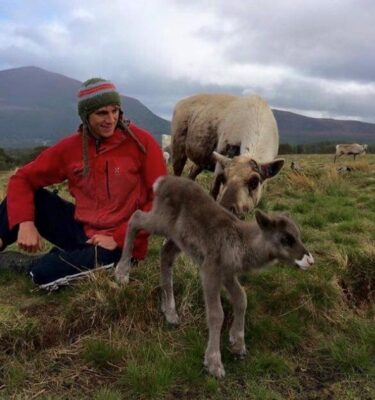 During March – the time that COVID began to impact this country – I was working at York District Hospital as a Physiotherapist. I was on an acute medical rotation. So, being hospital-based I was dealing less with achey knees and more on the branch of chest physiotherapy. This involves helping patients expectorate retained secretions, recruit lost lung volumes and preserve an effective cough, as well as general ward-based rehabilitation. Hospital operations changed drastically during these times, with almost daily changes. Throughout April, about half the hospital space was set aside, ready for potential COVID patients. Everyone there was doing a fantastic job and staff morale had never been higher. Perhaps it was the camaraderie. Perhaps it was the public appreciation for the NHS. Perhaps it was all the free cake and coffee being delivered.

Now, in May, I have made the long-planned move to Aviemore in Scotland, where I will eventually be working part time as a Physiotherapist and part time as a Reindeer Herder for the small, family-run, Cairngorm Reindeer Herd. Times are tough for them with no visitors allowed, and they’re currently running a Reindeer adoption scheme on their website to help raise funds for the deer’s upkeep. Calving season is now upon us and we have had plenty of adorable arrivals so far. Long may it continue. 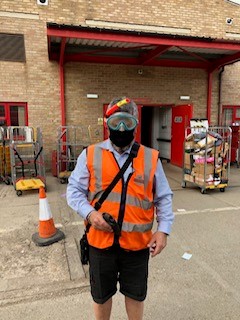 I am a Postie and life hasn’t been busier. Online shopping is keeping part of our economy afloat. I’ve been a Postie for 20 years and have never seen the level of work rise so much for so long.

The community spirit is great and it always makes me smile when the kids and households wave and say thank you. I’m proud to serve but it has been a worry, and continues to be so, for my family but duty must prevail.